CHICAGO – MRI brain scans perform better than common clinical tests at predicting which people will go on to develop Alzheimer’s disease, according to a study being presented next week at the annual meeting of the Radiological Society of North America (RSNA).

Alzheimer’s disease is a progressive, irreversible brain disorder that destroys memory and thinking skills. The disease affects 5.5 million Americans, according to the National Institutes of Health. 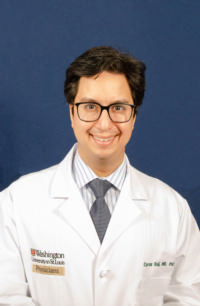 “Alzheimer’s disease is the most common cause of dementia in the world and is expected to increase globally, and especially in the U.S., as the population gets older,” said the study’s lead author Cyrus A. Raji, M.D., Ph.D., assistant professor of radiology at the Mallinckrodt Institute of Radiology at Washington University School of Medicine in St. Louis. “As we develop new drug therapies and study them in trials, we need to identify individuals who will benefit from these drugs earlier in the course of the disease.”

Common predictive models like standardized questionnaires used to measure cognition and tests for the APOE4 gene, a gene variant associated with a higher risk of Alzheimer’s disease, have limitations and—with accuracy rates of about 70-71 percent—fail to identify many people who go on to develop the disease.

MRI exams of the brain using diffusion tensor imaging (DTI) are a promising option for analysis of dementia risk. These exams assess the condition of the brain’s white matter.

“With DTI you look at the movement of water molecules along white matter tracts, the telephone cables of brain,” Dr. Raji said. “When these tracts are not well connected, cognitive problems can result.”

DTI provides different metrics of white matter integrity, including fractional anisotropy (FA), a measure of how well water molecules move along white matter tracts. A higher FA value indicates that water is moving in a more orderly fashion along the tracts, while a lower value means that the tracts are likely damaged.

For the new study, Dr. Raji and colleagues set out to quantify differences in DTI in people who decline from normal cognition or mild cognitive impairment to Alzheimer’s dementia compared to controls who do not develop dementia. They performed brain DTI exams on 61 people drawn from the Alzheimer’s Disease Neuroimaging Initiative, a major, multisite study focusing on the progression of the disease.

About half of the patients went on to develop Alzheimer’s disease, and DTI identified quantifiable differences in the brains of those patients. People who developed the disease had lower FA compared with those who didn’t, suggesting white matter damage. They also had statistically significant reductions in certain frontal white matter tracts.

“DTI performed very well compared to other clinical measures,” Dr. Raji said. “Using FA values and other associated global metrics of white matter integrity, we were able to achieve 89 percent accuracy in predicting who would go onto develop Alzheimer’s disease. The Mini-mental State Examination and APOE4 gene testing have accuracy rates of about 70 – 71 percent.”

The researchers conducted a more detailed analysis of the white matter tracts in about 40 of the study participants. Among those patients, the technique achieved 95 percent accuracy, Dr. Raji said.

While more work is needed before the approach is ready for routine clinical use, the results point to a future role for DTI in the diagnostic workup of people at risk for Alzheimer’s disease. Many people already receive MRI as part of their care, so DTI could add significant value to the exam without substantially increasing the costs, Dr. Raji said.

Perhaps most importantly, MRI measures of white matter integrity could speed interventions that slow the course of the disease or even delay its onset.

“Research shows that Alzheimer’s disease risk can be reduced by addressing modifiable risk factors like obesity and diabetes,” Dr. Raji said. “With early detection, we can enact lifestyle interventions and enlist volunteers into drug trials earlier.”

This work was funded by the Boerger Research Fund for Alzheimer's Disease and Neurocognitive Disorders from the Foundation of the American Society of Neuroradiology.