Croup is an upper respiratory condition that often affects infants and young children. Typical symptoms include a barking cough and respiratory distress. Children with croup are usually diagnosed based on a clinical examination. Your doctor may also perform an airway or chest x-ray to help make the diagnosis.

Croup usually improves by itself. However, home treatments that introduce humidity or cold air into the environment are often used to help improve breathing.

Croup—also known as acute laryngotracheobronchitis—is an upper respiratory condition that often affects infants and young children. Typical symptoms in affected patients include a barking cough and respiratory distress. This condition is often triggered by a viral infection that causes swelling in the throat around the vocal cords and trachea, or windpipe. Symptoms tend to be worse at night and can last up to six days. Most cases occur in patients younger than one year, with peak incidence occurring in children three to six months of age.

How is croup diagnosed and evaluated?

Children with croup are usually diagnosed based on a clinical examination. Your physician may listen to your child's breathing with a stethoscope for wheezing and decreased breath sounds. Visual examination of the throat may reveal redness in the upper airway and/or epiglottis, the tissue flap in the throat that keeps food and liquid from entering the trachea and lungs.

Chest x-ray: X-rays of the neck or chest are the initial imaging choice for assisting in diagnosis and excluding other potential causes of similar symptoms such as foreign body aspiration.

X-rays of affected pediatric patients with croup often show a tapering or narrowing of the airway below the vocal cords. This pattern is known as the steeple sign because its inverted V shape is reminiscent of a church steeple.

How is croup treated?

Croup usually improves by itself, and most cases can be safely managed at home.

Home treatments focus on improving breathing by introducing humidity or cold air into the environment. You might run hot water in your shower with the bathroom door and windows closed and bring your child into the steamy room for 10 minutes. In cooler months, taking your child outside for a few minutes may ease symptoms. Running a cool air vaporizer in the child's bedroom at night also can help improve breathing.

Acetaminophen or ibuprofen may be used to lower a fever and make your child more comfortable.

Steroid medicines and medicated sprays are sometimes used to reduce upper airway swelling in children with croup who do not response to conservative management.

Signs of a more serious condition include increasing or persistent breathing difficulty, fatigue, bluish coloration of the skin and dehydration. Emergency response must be considered immediately if you observe any of these more severe symptoms as children may have a very low tolerance to decreased oxygen saturation due to breathing problems.

In rare cases, pediatric patients affected with croup require hospitalization. Physicians will treat obstruction of the airway with steroid medications, inhaled adrenaline and oxygen. Infrequently intubation, or the placement of a tube through the nose or mouth and into the main air passage to the lungs, is required. Intravenous fluids are given for dehydration. 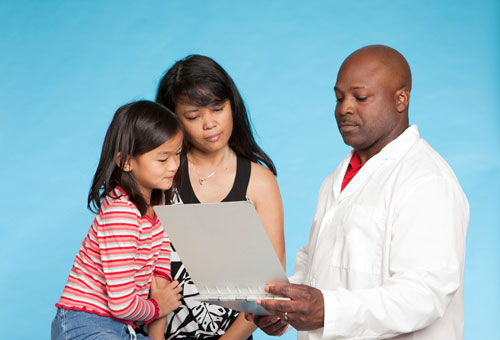