Diffuse interstitial (in-tur-STISH-ul) lung disease refers to a large group of lung disorders that affect the interstitium, which is the connective tissue that forms the support structure of the alveoli (air sacs) of the lungs. Normally when you inhale, the air sacs fill with air and oxygen passes into the blood stream. When you exhale, carbon dioxide that passed from the blood into the air sacs is expelled from the body. When interstitial lung disease is present, the lung is inflamed and stiff, preventing the air sacs from fully expanding. This limits both the delivery of oxygen to the blood stream and the removal of carbon dioxide from the body. As the disease progresses, the interstitium thickens, which further impedes lung function.

Blood tests, pulmonary function tests (spirometry), pulse oximetry, chest x-ray, chest CT, bronchoscopy with biopsy, surgical biopsy, or a combination of the above may be performed to help diagnose your condition. Treatment may depend on the underlying cause of the disease and your health status. Medication, respiratory therapy or surgery may be prescribed to help improve lung function.

What is diffuse interstitial lung disease?

Diffuse interstitial lung disease (ILD) is a group of complex disorders that affect the connective tissue (interstitium) that forms the support structure of the alveoli (air sacs) of the lungs.

In a normal lung, the air sacs fill with air during inhalation. Oxygen within the air passes through the walls of the air sacs into the blood stream and carbon dioxide passes from the blood into the air sacs. When affected by interstitial lung disease, the tissue supporting the air sacs becomes inflamed and stiff, which makes it difficult for the air sacs to fully expand. The abnormal interstitium limits the delivery of oxygen to the body and the removal of carbon dioxide from the body. As interstitial lung disease progresses, the interstitium scars and thickens the alveolar walls, further decreasing lung function. In some cases, inflammation may be confined to one or more areas of the lung. However, it is frequently diffuse, meaning it occurs throughout both lungs.

It may also be caused by exposure to drugs, such as:

It may also stem from the inhalation of substances, such as

The most common symptoms of diffuse interstitial lung disease are shortness of breath and dry cough. As the disease progresses, a patient may experience weight loss, muscle and joint pain, and fatigue. At a more advanced stage, an individual may develop an enlarged heart, enlargement of the fingertips clubbing), and cyanosis (blue coloration in the lips, skin and fingernails as a result of reduced oxygen levels in the blood).

How is diffuse interstitial lung disease diagnosed and evaluated?

To determine the cause of interstitial lung disease, a physician may perform a physical examination and order diagnostic tests, including:

Treatment depends on the cause of the interstitial lung disease and the overall health of the patient. Various drugs may be prescribed to reduce inflammation in the lungs and/or to suppress the immune system.

Oxygen or respiratory therapy may be offered to help improve lung function. Some patients with advanced lung disease may require a lung transplant. 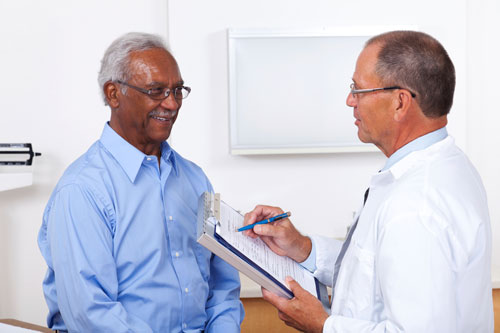