Fatty Liver Disease (FLD) is a condition where normal liver tissue is replaced by more than 5-6 percent fat. In FLD, the accumulation of fat can cause inflammation, cell death, and scarring – a condition called steatohepatitis. Left untreated, steatohepatitis can lead to liver fibrosis which causes diminished blood flow throughout the liver and a buildup of scar tissue. Without treatment, liver fibrosis may lead to cirrhosis, liver failure, and liver cancer.

Your doctor will conduct a physical exam and may order blood tests to evaluate your liver function. You also may undergo abdominal ultrasound, abdominal CT, body MRI, ultrasound elastography, magnetic resonance elastography, or liver biopsy to help diagnosis your condition. Treatment for FLD and/or liver fibrosis depends on the underlying cause and is typically aimed at preventing, slowing or reversing the progression of liver fibrosis. Options include lifestyle changes, medication, and cholesterol and diabetes management.

What are Fatty Liver Disease and Liver Fibrosis?

One of the many causes of liver disease is the buildup of too much fat in the organ, called steatosis. The liver normally contains some fat, but more than 5-6 percent of fat is abnormal. The class of liver disease in which liver becomes fatty (or steatotic) is called Fatty Liver Disease (FLD).

There are two major causes of FLD:

Other causes of FLD include: viral hepatitis, certain medications including steroids and chemotherapy, and pregnancy.

FLD can progress to a condition called steatohepatitis when the accumulation of fat in the liver causes inflammation, cell death, and scarring. Long-standing steatohepatitis leads to liver fibrosis as scar tissue builds up and replaces healthy liver tissue.

Liver fibrosis results in diminished blood flow throughout the liver. As healthy liver tissue is lost, the liver also loses its ability to function. If untreated, liver fibrosis may progress to cirrhosis of the liver, liver failure, and liver cancer.

Unfortunately, many patients with FLD and liver fibrosis do not realize they have liver disease because the symptoms are often vague, like mild fatigue or abdominal discomfort.

As liver disease progresses over time, patients may begin to experience:

How are Fatty Liver Disease and Liver Fibrosis diagnosed and evaluated?

Your doctor will begin by asking you about your medical history and symptoms. You will also undergo a physical exam.

In order to diagnose FLD and liver fibrosis, your doctor may order blood tests to evaluate liver function, including tests to assess the level of the liver enzymes ALT and AST, which can be high when the liver is fatty.

Your doctor may also order imaging tests of the liver such as:

How are Fatty Liver Disease and Liver Fibrosis treated?

Treatment for FLD and liver fibrosis varies depending on the cause. Doctors typically recommend treatment aimed at preventing or delaying progression of fibrosis. With treatment, the progression of liver disease can be slowed and may be reversed.

For example, therapies for NAFLD may include:

Which test, procedure, or treatment is best for me? 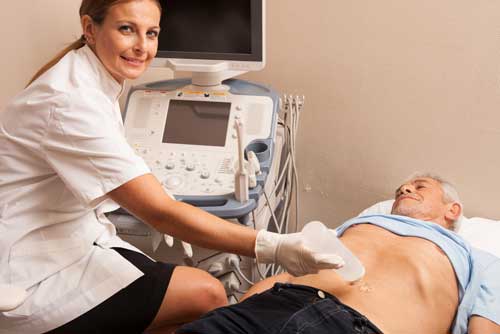