Radioiodine therapy is a nuclear medicine treatment for an overactive thyroid, a condition called hyperthyroidism, and also may be used to treat thyroid cancer. When a small dose of radioactive iodine I-131 (an isotope of iodine that emits radiation) is swallowed, it is absorbed into the bloodstream and concentrated by the thyroid gland, where it begins destroying the gland's cells.

Your doctor will instruct you on how to prepare, how to take any necessary radiation safety precautions, and when to stop taking anti-thyroid medications. Tell your doctor if there's a possibility you are pregnant or if you are breastfeeding and discuss any recent illnesses, medical conditions, allergies and medications you're taking. Little to no special preparation is required for this procedure. However, you should not eat or drink anything after midnight on the day of treatment.

Radioactive Iodine I-131 (also called Radioiodine I-131) therapy is a treatment for an overactive thyroid, a condition called hyperthyroidism. Hyperthyroidism can be caused by Graves' disease, in which the entire thyroid gland is overactive, or by nodules within the gland which are locally overactive in producing too much thyroid hormone.

Nuclear medicine uses small amounts of radioactive material called radiotracers. Doctors use nuclear medicine to diagnose, evaluate, and treat various diseases. These include cancer, heart disease, gastrointestinal, endocrine, or neurological disorders, and other conditions. Nuclear medicine exams pinpoint molecular activity. This gives them the potential to find disease in its earliest stages. They can also show whether you are responding to treatment.

The thyroid is a gland in the neck that produces two hormones that regulate all aspects of the body's metabolism, the chemical process of converting food into energy. When a thyroid gland is overactive, it produces too much of these hormones, accelerating the metabolism.

Radioactive iodine (I-131), an isotope of iodine that emits radiation, is used for medical purposes. When a small dose of I-131 is swallowed, it is absorbed into the bloodstream in the gastrointestinal (GI) tract and concentrated from the blood by the thyroid gland, where it begins destroying the gland's cells.

Radioactive iodine I-131 may also be used to treat thyroid cancer.

Who will be involved in this procedure?

A radiologist who has specialized training in nuclear medicine and others, possibly including an endocrinologist, thyroid surgeon and radiation safety officer, will be part of your treatment team.

What equipment is used?

There is no equipment used during radioactive iodine therapy.

Who operates the equipment?

There is no equipment used during radioactive iodine therapy, the patient simply swallows a prepared dose.

Is there any special preparation needed for the procedure?

You will be able to return home following radioactive iodine treatment, but you should avoid prolonged, close contact with other people for several days, particularly pregnant women and small children. The majority of the radioactive iodine that has not been absorbed leaves the body during the first two days following the treatment, primarily through the urine. Small amounts will also be excreted in saliva, sweat, tears, vaginal secretions, and feces.

If your work or daily activities involve prolonged contact with small children or pregnant women, you will want to wait several days after your treatment to resume these activities. Patients with infants at home should arrange for care to be provided by another person for the first several days after treatment. Your radiologist can be more specific for your given situation, but usually this time period is only two to five days.

Your treatment team will give you a list of other precautions to take following your treatment with I-131. The following guidelines comply with the Nuclear Regulatory Commission:

Patients who need to travel immediately after radioactive iodine treatment are advised to carry a letter of explanation from their physician. Radiation detection devices used at airports and federal buildings may be sensitive to the radiation levels present in patients up to three months following treatment with I-131. Depending on the amount of radioactivity administered during your treatment, your endocrinologist or radiation safety officer may recommend continued precautions for up to several weeks after treatment.

Radioiodine therapy is not used in a patient who is pregnant. Depending on the stage of pregnancy, I-131 given to the mother may damage the baby's thyroid gland. In such a case, discussion of the issue with the patient's physician is advised. When given to a nursing mother, radioactive iodine can reach a baby through her breast milk. Most physicians feel that this procedure should not be used in women who are breastfeeding unless they are willing to cease breastfeeding their newborn. Also, it is recommended that pregnancy be delayed until at least six to 12 months after I-131 treatment.

Women who have not yet reached menopause should fully discuss the use of I-131 with their physician.

Treatment for hyperthyroidism is almost always done on an outpatient basis because the dose required is relatively small.

The radioiodine I-131 is swallowed in a single dose, in capsule or liquid form, and is quickly absorbed into the bloodstream in the gastrointestinal (GI) tract and concentrated from the blood by the thyroid gland, where it begins destroying the gland's cells. Although the radioactivity from this treatment remains in the thyroid for some time, it is greatly diminished within a few days. The effect of this treatment on the thyroid gland usually takes between one and three months to develop, with maximum benefit occurring three to six months after treatment. Usually, a single dose is successful in treating hyperthyroidism. However, rarely, a second treatment is needed, and very rarely a third treatment may be needed.

What will I feel during this procedure?

Patients may experience some pain in the thyroid after I-131 therapy similar to a sore throat. You should ask your physician to recommend an over-the-counter pain reliever to treat this pain, should it occur.

Are there permanent side effects from the procedure?

It is highly likely that some or most of the thyroid gland will be destroyed with this procedure. Since hormones produced by the thyroid are essential for metabolism, most patients will need to take thyroid pills for the rest of their life following the procedure. Thyroid pills are inexpensive, and patients will typically be instructed to take one per day. There are essentially no other permanent side effects from the procedure. 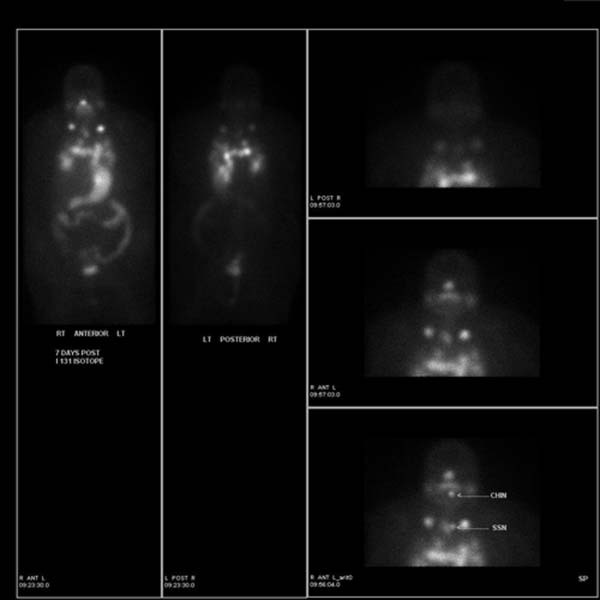