What are contrast materials and how do they work?

Contrast materials are not dyes that permanently discolor internal organs. They are substances that temporarily change the way x-rays or other imaging tools interact with the body.

Contrast materials enter the body in one of three ways. They can be:

Following an imaging exam with contrast material, the material is absorbed by the body or eliminated through urine or bowel movements.

There are several types of contrast materials:

Barium-sulfate is the most common contrast material taken by mouth, or orally. It is also used rectally and is available in several forms, including:

When iodine-based and barium-sulfate contrast materials are present in a specific area of the body, they block or limit the ability of x-rays to pass through. As a result, blood vessels, organs and other body tissue that temporarily contain iodine-based or barium compounds change their appearance on x-ray or CT images.

Which imaging exams use contrast materials?

Barium-sulfate contrast materials that are swallowed or administered by mouth (orally) are used to enhance x-ray and CT images of the gastrointestinal (GI) tract, including:

Barium-sulfate contrast materials that are administered by enema (rectally) are used to enhance x-ray and CT images of the lower gastrointestinal (GI) tract (colon and rectum).

Microbubble contrast materials are tiny bubbles of an injectable gas held in a supporting shell. They are extremely small—smaller than a red blood cell—and have a high degree of "echogenicity", or ability to reflect ultrasound waves. Structures with higher echogenicity will appear brighter on ultrasound. Once the microbubbles are in the bloodstream, ultrasound technology is able capture differences in echogenicity between the gas in the microbubbles and the surrounding tissues of the body, producing an ultrasound image with increased contrast. The microbubbles dissolve, usually within 10 to 15 minutes, and the gas within them is removed from the body through exhalation. Contrast-enhanced ultrasound with microbubbles is a convenient, relatively inexpensive way to improve visualization of blood flow that does not use radiation. It is a useful option for patients with kidney failure or allergies to MRI and/or computed tomography (CT) contrast material.

Microbubble contrast materials can be targeted or untargeted. Untargeted contrast-enhanced ultrasound —the more common method— helps diagnose certain diseases by providing evaluation of blood flow in the heart and other organs. In targeted contrast-enhanced ultrasound, specific molecules are bound to the surface of the microbubbles. After injection, the microbubbles attach at tissue sites expressing the molecular target, leading to a local increase in the ultrasonic signal.

Contrast-enhanced ultrasound with microbubbles is used in the assessment of:

How safe are contrast materials?

How should I prepare for my imaging procedure with contrast material?

Because contrast materials carry a slight risk of causing an allergic reaction or adverse reaction, you should tell your doctor about:

You will be given specific instructions on how to prepare for your exam.

Side effects and adverse and allergic reactions

You should tell your doctor if these mild side effects of barium-sulfate contrast materials become severe or do not go away:

Tell your doctor immediately about any of these symptoms:

You are at greater risk of an adverse reaction to barium-sulfate contrast materials if:

A very small percentage of patients may develop a delayed reaction with a rash which can occur hours to days after an imaging exam with an iodine-based contrast material. Most are mild, but severe rashes may require medication after discussion with your physician.

Some conditions increase the risk of an allergic or adverse reaction to iodine-based contrast materials. These include:

The contrast material used in MR called gadolinium is less likely to produce an allergic reaction than the iodine-based materials used for x-rays and CT scanning. Very rarely, patients are allergic to gadolinium-based contrast materials and experience hives and itchy eyes. Reactions usually are mild and easily controlled by medication. Severe reactions are rare.

There is evidence that tiny traces of gadolinium may be retained in different organs of the body, including the brain, after contrast-enhanced MRI. While there are no known negative effects from this, your doctor may take gadolinium retention into account when selecting a contrast agent. There are a number of different gadolinium-based contrast agents available, each with its own safety profile. Decisions on which material to use may be affected by the part of the body being imaged, the cost of the material and other factors. These decisions are especially important in patients likely to undergo multiple MRI scans with gadolinium-based contrast material, such as pediatric patients, cancer patients and people with multiple sclerosis.

What will I experience before and after receiving contrast material?

If you swallow the contrast material, you may find the taste mildly unpleasant; however, most patients can easily tolerate it.

If your contrast material is given by enema, you can expect to experience a sense of abdominal fullness and an increasing need to expel the liquid. The mild discomfort will not last long.

Barium-sulfate contrast materials are expelled from the body with feces. You can expect bowel movements to be white for a few days. Some patients may experience changes in their normal bowel movement patterns for the first 12 to 24 hours.

When an iodine-based contrast material is injected into your bloodstream, you may have a warm, flushed sensation and a metallic taste in your mouth that lasts for a few minutes.

The needle may cause you some discomfort when it is inserted. Once it is removed, you may experience some bruising.

When the gadolinium is injected, it is normal to feel coolness at the site of injection, usually the arm for a minute or two.

The needle may cause you some discomfort when it is inserted. Once it is removed, you may experience some bruising.

For all of the above administrations of contrast material (barium sulfate, iodine-based, and gadolinium-based):

If you have not been sedated, no recovery period is necessary. You may resume your usual activities and normal diet immediately after the exam. Increased fluid intake will help eliminate the contrast material from your body.

Prior to any imaging exam, women should always inform their physician or x-ray technologist if there is any possibility that they are pregnant. Many imaging tests and contrast material administrations are avoided during pregnancy to minimize risk to the baby.

For CT imaging, if a pregnant woman must undergo imaging with an iodine-based contrast material, the patient should have a discussion with her referring physician and radiologist to understand the potential risks and benefits of the contrast-enhanced scan.

For MR imaging, gadolinium contrast material administration is usually avoided due to unknown risk to the baby, but may be used when critical information must be obtained that is only available with the use of gadolinium-based contrast material.

Manufacturers of intravenous contrast indicate mothers should not breast-feed their babies for 24 to 48 hours after contrast medium is given. However, both the American College of Radiology (ACR) and the European Society of Urogenital Radiology note that the available data suggest that it is safe to continue breast-feeding after receiving intravenous contrast. The Manual on Contrast Media from the ACR states:

"Review of the literature shows no evidence to suggest that oral ingestion by an infant of the tiny amount of gadolinium contrast medium excreted into breast milk would cause toxic effects. We believe, therefore, that the available data suggest that it is safe for the mother and infant to continue breast-feeding after receiving such an agent.

If the mother remains concerned about any potential ill effects, she should be given the opportunity to make an informed decision as to whether to continue or temporarily abstain from breast-feeding after receiving a gadolinium contrast medium. If the mother so desires, she may abstain from breast-feeding for 24 hours with active expression and discarding of breast milk from both breasts during that period. In anticipation of this, she may wish to use a breast pump to obtain milk before the contrast study to feed the infant during the 24-hour period following the examination."

For further information please consult the ACR Manual on Contrast Media and its references. You may find it here on the ACR website. 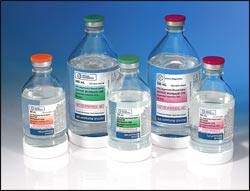 A photograph of contrast material, which is also referred to as contrast agent or contrast medium.