Radiofrequency ablation (RFA) and microwave ablation (MWA) are treatments that use image guidance to place a needle through the skin into a liver tumor. In RFA, high-frequency electrical currents are passed through an electrode in the needle, creating a small region of heat. In MWA, microwaves are created from the needle to create a small region of heat. The heat destroys the liver cancer cells. RFA and MWA are effective treatment options for patients who might have difficulty with surgery or those whose tumors are less than one and a half inches in diameter. The success rate for completely eliminating small liver tumors is greater than 85 percent.

Your doctor will instruct you on how to prepare. Inform your doctor if there's a possibility you are pregnant and discuss any recent illnesses, medical conditions, allergies and medications you're taking. Your doctor may advise you to stop taking aspirin, nonsteroidal anti-inflammatory drugs (NSAIDs) or blood thinners several days prior to your procedure. You may be instructed not to eat or drink anything for several hours before the procedure. Leave jewelry at home and wear loose, comfortable clothing. You may be asked to wear a gown. Plan to have someone drive you home afterward.

What are Radiofrequency and Microwave Ablation of Liver Tumors?

Radiofrequency ablation, sometimes referred to as RFA, is a minimally invasive treatment for cancer. It is an image-guided technique that uses heat to destroy cancer cells. It uses imaging techniques such as ultrasound, computed tomography (CT) or magnetic resonance imaging (MRI) to help guide a needle electrode into a cancerous tumor. High-frequency electrical currents are then passed through the electrode to ground pads placed on the body, creating focal heat that destroys the cancer cells surrounding the electrode.

Microwave ablation (MWA) is also a minimally-invasive treatment for cancer. MWA also uses ultrasound, computed tomography (CT) or magnetic resonance imaging (MRI) to guide placement of a specialized needle-like probe into a tumor. MWA uses microwaves to heat and destroy the tumor and is used for the same indications as RFA. The procedure is typically performed on an outpatient basis or with overnight observation in the hospital with general anesthesia. For the patient, MWA offers low risk and a short hospital stay. Ablation can be used to treat multiple tumors simultaneously. The procedure can be repeated if new cancer appears.

Radiofrequency and microwave ablation are used to treat many types of liver cancer. The two most common types are:

Ablation may also be used for multiple other types of cancer and masses within the liver. In general, radiofrequency ablation is most effective treating tumors that are less than one and a half inches in diameter. It may be used in addition to chemotherapy or radiation therapy or as an alternative to surgical treatment.

Ablation is a viable and effective treatment option if you:

Tell your doctor about all the medications you take, including herbal supplements. List any allergies, especially to local anesthetic, general anesthesia or to contrast materials. Your doctor may tell you to stop taking aspirin, nonsteroidal anti-inflammatory drugs (NSAIDs) or blood thinners before your procedure.

Prior to your procedure, your blood may be tested to determine how well your kidneys are functioning and whether your blood clots normally.

Women should always inform their physician and x-ray technologist if there is any possibility that they are pregnant. Many imaging tests are not performed during pregnancy so as not to expose the fetus to radiation. If an x-ray is necessary, precautions will be taken to minimize radiation exposure to the baby. See the Safety page for more information about pregnancy and x-rays.

You will likely be instructed not to eat or drink anything after midnight before your procedure. Your doctor will tell you which medications you may take in the morning.

Plan to have someone drive you home after your procedure.

You may need to wear a gown during the procedure.

The equipment used in this procedure depends on the type of imaging used—magnetic resonance (MR), computed tomography (CT), or ultrasound. Other equipment such as needle electrodes, an electrical generator and grounding pads may also be used.

There are two types of needle electrodes: simple straight needles and a straight, hollow needle that contains several retractable electrodes that extend when needed.

The radiofrequency generator produces electrical currents in the range of radiofrequency waves. It is connected by insulated wires to the needle electrodes and to grounding pads that are placed on the patient's back or thigh.

A straight needle is used.

The microwave generator produces electromagnetic waves in the microwave energy spectrum. It is connected by insulated wires to the needles.

The CT scanner is typically a large, donut-shaped machine with a short tunnel in the center. You will lie on a narrow examination table that slides in and out of this short tunnel. Rotating around you, the x-ray tube and electronic x-ray detectors are located opposite each other in a ring, called a gantry. The computer workstation that processes the imaging information is located in a separate control room. This is where the technologist operates the scanner and monitors your exam in direct visual contact. The technologist will be able to hear and talk to you using a speaker and microphone.

Ultrasound scanners consist of a computer console, video display screen and an attached transducer. The transducer is a small hand-held device that resembles a microphone. Some exams may use different transducers (with different capabilities) during a single exam. The transducer sends out inaudible, high-frequency sound waves into the body and then listens for the returning echoes. The principles are similar to sonar used by boats and submarines.

The technologist applies a small amount of gel to the area under examination and places the transducer there. The gel allows sound waves to travel back and forth between the transducer and the area under examination. The ultrasound image is immediately visible on a video display screen that looks like a computer monitor. The computer creates the image based on the loudness (amplitude), pitch (frequency) and time it takes for the ultrasound signal to return to the transducer. It also takes into account what type of body structure and/or tissue the sound is traveling through.

The traditional MRI unit is a large cylinder-shaped tube surrounded by a circular magnet. You will lie on a table that slides into the center of the magnet.

Other equipment that may be used during the procedure includes an intravenous line (IV), ultrasound machine and devices that monitor your heart beat and blood pressure.

Radiofrequency ablation works by passing electrical currents in the range of radiofrequency waves between the needle electrode and the grounding pads placed on the patient's skin. These currents create heat around the electrode, which when directed into the tumor, heats and destroys the cancer cells. At the same time, heat from radiofrequency energy closes small blood vessels and lessens the risk of bleeding. The dead tumor cells are gradually replaced by scar tissue that shrinks over time.

Microwave ablation works by producing electromagnetic waves in the microwave energy spectrum. These microwaves create heat around the needle, which heat and destroy the cancer cells. Heat closes small blood vessels and lessens the risk of bleeding. The dead tumor cells are gradually replaced by scar tissue.

Ultrasound, computed tomography or magnetic resonance imaging may be used to help the physician guide the needle electrode into the tumor.

Ablation is often done on an outpatient basis.

You will be positioned on the procedure table.

You may be connected to monitors that track your heart rate, blood pressure, oxygen level and pulse.

A nurse or technologist will insert an intravenous (IV) line into a vein in your hand or arm so that sedation medication can be given intravenously.

The area where the needles are to be inserted will be sterilized and covered with a sterile drape.

A very small nick may be made in your skin to make it easier to pass the needle into your liver.

Ablation is performed using one of three methods:

Using imaging-guidance, your physician will insert the needle electrode through the skin and advance it to the site of the tumor.

At the end of the procedure, the needle electrode will be removed and pressure will be applied to stop any bleeding and the opening in the skin is covered with a dressing. No sutures are needed.

Your IV line is removed before you go home.

Each ablation takes about 10 to 30 minutes, with additional time required if multiple ablations are performed. The entire procedure is usually completed within one to three hours.

Devices to monitor your heart rate and blood pressure will be attached to your body.

If the procedure is done with sedation, the intravenous (IV) sedative will make you feel relaxed, sleepy and comfortable for the procedure. You may or may not remain awake, depending on how deeply you are sedated.

If you are put under general anesthesia, your throat may be sore after you wake up. This is caused by the breathing tube that was placed in your throat while you were asleep.

You will remain in the recovery room until you are completely awake and ready to return home.

You should be able to resume your usual activities within a few days.

Only about ten percent of patients will still have pain a week following ablation.

Computed tomography (CT) or magnetic resonance imaging (MRI) of the liver is performed within a few hours to a month following radiofrequency ablation. A radiologist will interpret these CT or MRI scans to detect any complications, to ensure that all of the tumor tissue has been treated and to assess any residual tumor.

You will undergo CT or MRI scans every three to four months to check for new tumors.

What are the limitations of Radiofrequency and Microwave Ablation of Liver Tumors?

There is a limit to the volume of tumor tissue that can be eliminated by ablation. This is due to limitations with current equipment. Hopefully technical advances will permit larger tumors to be treated in the future. Ablation also cannot destroy microscopic-sized tumors and cannot prevent cancer from growing back. 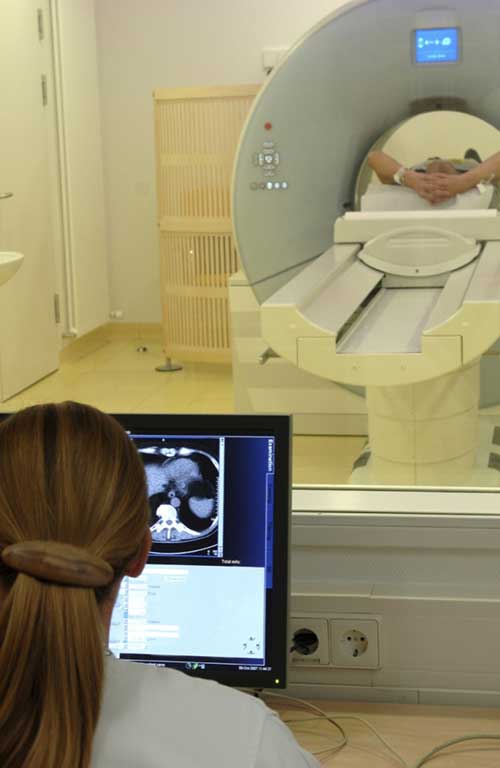