Ultrasound of the prostate uses sound waves to produce pictures of a man's prostate gland and to help diagnose symptoms such as difficulty urinating or an elevated blood test result. It's also used to investigate a nodule found during a rectal exam, detect abnormalities, and determine whether the gland is enlarged. Ultrasound is safe, noninvasive, and does not use ionizing radiation.

This procedure requires little to no special preparation. Leave jewelry at home and wear loose, comfortable clothing. You may be asked to wear a gown and to lie on your side with your knees toward your chest. To obtain high-quality images, an ultrasound transducer – a plastic cylinder about the size of a finger – is inserted a short distance into the rectum. The transducer is covered with a protective sheath and lubricated with gel. If a biopsy is planned, you may be told to avoid aspirin and other blood thinners for seven to 10 days prior to the procedure. You may be instructed to use an enema to clean out your bowel and take antibiotics before a biopsy procedure.

What is Ultrasound Imaging of the Prostate?

Ultrasound imaging is a noninvasive medical test that helps physicians diagnose and treat medical conditions. It is safe and painless. It produces pictures of the inside of the body using sound waves. Ultrasound imaging is also called sonography. It uses a small probe called a transducer and gel placed directly on the skin. High-frequency sound waves travel from the probe through the gel into the body. The probe collects the sounds that bounce back. A computer uses those sound waves to create an image. Ultrasound exams do not use radiation (x-rays). Because ultrasound captures images in real-time, it can show the structure and movement of the body's internal organs. The images can also show blood flowing through blood vessels.

A transrectal ultrasound of the prostate gland is performed to:

A transrectal ultrasound of the prostate gland is typically used to help diagnose symptoms such as:

Because ultrasound provides real-time images, it also can be used to guide procedures such as needle biopsies, in which a needle is used to sample cells (tissue) from an abnormal area in the prostate gland for later laboratory testing.

Wear comfortable, loose-fitting clothing. You may need to remove all clothing and jewelry in the area to be examined.

You may need to change into a gown for the procedure.

You may be instructed to avoid taking blood thinners, such as aspirin, for seven to 10 days prior to the procedure and to take antibiotics if a biopsy is planned. An enema may be taken two to four hours before the ultrasound to clean out the bowel.

For ultrasound procedures such as transrectal exams that require insertion of an imaging probe, also called a transducer, the device is covered and lubricated with a gel.

The same principles apply to ultrasound procedures such as transrectal ultrasound which require insertion of a special imaging probe or transducer into the body.

For a transrectal ultrasound, you will be asked to lie on your side with your knees bent. A disposable protective cover is placed over the transducer, it is lubricated, inserted through the anus and placed into the rectum.

The images are obtained from different angles to get the best view of the prostate gland.

If a suspicious lesion is identified with ultrasound or with a rectal examination, an ultrasound-guided biopsy can be performed. This procedure involves advancing a needle into the prostate gland. A small amount of tissue is taken for microscopic examination.

A prostate-specific antigen (PSA) test, which measures the amount of PSA in the blood, may be administered to determine if a patient is at high risk for cancer. In this case, a biopsy is performed and an ultrasound probe is used to guide the biopsy to specific regions of the prostate gland.

This ultrasound examination is usually completed in less than 20 minutes. A biopsy procedure will take longer depending on how many samples are being taken from the prostate.

Ultrasound exams that insert the transducer into a body cavity may produce minimal discomfort.

If no biopsy is necessary, transrectal ultrasound of the prostate is similar to or may have less discomfort than a rectal exam performed by your doctor.

If a biopsy is necessary, additional discomfort (due to the needle insertion) is usually minimal. This is because the rectal wall is relatively insensitive to the pain in the region of the prostate. A biopsy will add time to the procedure.

Rarely, a small amount of blood may be present in the sperm or urine following the procedure.

After an ultrasound exam, you should be able to resume your normal activities immediately.

A radiologist, a doctor trained to supervise and interpret radiology exams, will analyze the images. The radiologist will send a signed report to the doctor who requested the exam. Your doctor will then share the results with you. In some cases, the radiologist may discuss results with you after the exam. Some prostate ultrasound exams may also be performed by a urologist.

What are the limitations of Prostate Ultrasound Imaging?

Men who have had the end of their bowel (rectum) removed during prior surgery are not good candidates for ultrasound of the prostate gland because this type of ultrasound typically requires placing a probe into the rectum.

However, the radiologist may attempt to examine the prostate gland by placing a regular ultrasound imaging probe on the perineal skin of the patient (area between the legs, behind the scrotum, and in front of the anus).

Sometimes the gland can be examined by ultrasound this way, but the images may not be as detailed as with the transrectal probe. An MRI of the prostate gland is another alternative imaging option and may be done instead of or in-addition to an ultrasound.

Prostate MRI can sometimes be done without requiring anything to be placed into the rectum. It may be a good option for men who have had their rectum removed. 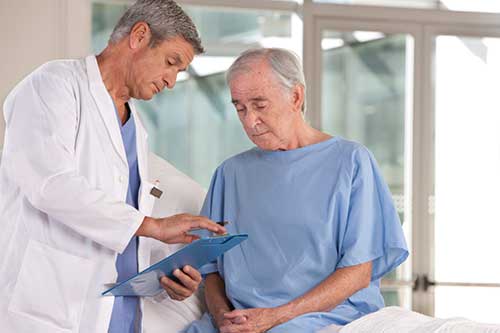