Breast cancer is a leading cause of cancer-related death in American women. It is now possible to detect most breast cancers at a very early stage. With early detection and improved treatments more women are surviving breast cancer. In fact, breast cancer survival has increased steadily over the last five decades. Today, women have more treatment options than ever before.

See the Mammography, Breast Cancer Screening and Breast Cancer disease pages for more information and to learn about early detection.

Surgical treatment options include mastectomy or breast conservation therapy (BCT). Mastectomy is an operation to remove the entire breast, and usually the entire nipple. Often an axillary (armpit) sampling is also done which removes the glands under the arm called axillary nodes. The surgeon may evaluate just one or two nodes (sentinel node/s) or may perform a more extensive axillary dissection to check for disease spread. Mastectomy sometimes requires a hospital stay. A drainage tube is sometimes temporarily left in the surgical cavity after a mastectomy to help prevent fluid accumulation. Women who undergo a mastectomy have the option of breast reconstruction.

Patients may also have chemotherapy or hormonal therapy if there is a risk that the cancer may have spread outside of the breast to other body organs.

Is radiation therapy necessary if the margins of the removed tissue are clear?

Many studies have reviewed this approach for patients with invasive cancers. Nearly all show that the risk of relapse in the breast is much higher when radiation is not used (20 percent to 40 percent) than when it is (five percent to 10 percent). When breast cancer re-occurs locally (in the breast) after breast conservation surgery, patients may then need to have a mastectomy to be cured. Because having breast cancer reappear in this way is a very traumatic psychological event, and because not everyone who has a recurrence in the breast can be cured, radiation therapy after lumpectomy has become a standard part of breast-conserving therapy.

There are several recent studies in which older patients with small, favorable invasive cancers have had a low risk of local relapse when treated with lumpectomy and hormonal therapy without radiation therapy. There is still uncertainty about the long-term results with this approach or about which individuals will do best without radiation therapy. This issue should be discussed in detail with your doctor.

For patients with noninvasive cancer (known as "ductal carcinoma in situ" or DCIS) matters are more complicated. Lumpectomy without radiation works well for many patients. However, there is disagreement on who can be treated safely with just a lumpectomy. This should be discussed in detail with your doctor. Sometimes, a genomic test may be ordered on the DCIS specimen to help patients make a more informed decision on whether or not to undergo radiation therapy. These tests look at a series of genes in the tumor itself. They may provide some information about a patient's tumor recurrence risk with and without radiation therapy. These tests are new for DCIS and not all tumors are eligible for this test.

How can I make a decision between mastectomy and breast conservation therapy?

Breast conservation therapy is often used for patients with early-stage invasive breast cancers (called Stage I and Stage II in the classification system). It is also used for patients with DCIS (also called Stage 0). Some of the reasons to not have breast conservation therapy include: personal preference; increased risk of complications from radiation therapy in individuals with certain rare medical conditions such as certain autoimmune disorders; surgery that would require removing a large amount of diseased breast tissue that would lead to a poor cosmetic result; and tumors that are more likely than average to have a relapse in the breast with breast conservation therapy. Women who are carriers for the “breast cancer gene” (BRCA 1 or 2) may sometimes elect for a double mastectomy.

Most patients may choose a treatment based on other factors, such as convenience (for example, how far you must travel to receive radiation therapy) or personal preference (wanting to preserve one's breast, wanting a quicker recovery with a lumpectomy, feeling safer if you undergo a mastectomy or being very worried about the possible side effects from radiation therapy). Most women prefer to keep their breast if this is possible to do safely, but there is no right answer that is best for everyone. This decision is one that is ideally made in partnership between a patient and her physician. In some cases a pre-surgical consultation with a radiation oncologist may be helpful in answering questions about breast-conserving therapy.

Nearly all physicians will recommend patients be treated with mastectomy instead of breast conservation therapy when the risk of recurrence in the breast is more than 20 percent. This is the case if the tumor is large or multifocal (has more than one focus). This situation occurs for only a small number of women, however.

What are the cosmetic results of breast conservation therapy?

Eighty percent to 90 percent of women treated with modern surgery and radiotherapy techniques have excellent or good cosmetic results; that is, little or no change in the treated breast in size, shape, texture or appearance compared with what it was like before treatment.

Patients with large breasts seem to have greater shrinkage of the breast after radiation therapy than do patients with smaller breasts. However, this problem usually can be overcome with the use of higher x-ray energies or with IMRT. Partial breast radiation using using external radiation therapy or brachytherapy can also be considered if the patient has a small early-stage tumor. This treatment is still undergoing clinical investigation. Certain single institution studies on brachytherapy and intraoperative radiation (IORT) have shown some promising results. You would need to discuss this with your doctor before or shortly after surgery to determine if you qualify for partial breast radiation.

What is the prognosis after recurrence?

Many patients with a recurrence of breast cancer can be successfully treated, often with methods other than radiation if radiation was used in the initial treatment. For patients treated initially for invasive breast cancer, five percent to 10 percent will be found to have distant metastases at the time of discovery of the breast recurrence. The same proportion will have recurrences that are too extensive to be operated on. While in these cases the patient's disease can often be managed over a period of years, the goals of treatment change from obtaining a cure to preventing further progression or managing symptoms. Five-year cure rates for patients with relapse after breast conservation therapy are approximately 60 percent to 75 percent if the relapse is confined to the breast and a mastectomy is then performed.

For patients treated initially for DCIS, about one-half of recurrences are invasive and one-half noninvasive DCIS. Long-term control rates following recurrence after initial breast conservation therapy have been high, often over 90 percent.

Radiation therapy uses high-energy x-rays (photons) or a stream of particles. When radiation is used at therapeutic doses (many times those used for x-ray imaging exams) it can destroy abnormal cells that cause cancer and other illnesses.

Some patients develop a sunburn-like reaction with blistering and peeling of the skin, called "moist desquamation." This usually occurs in the fold under the breast or in the fold between the breast and the arm, or sometimes in the area given a radiation boost. Most people with a limited area of moist desquamation can continue treatment without interruption. Sometimes, topical medications (those applied to the surface of the body) are prescribed. When treatment must be interrupted, the skin usually heals enough to allow radiation to be resumed in five to seven days. Skin reactions usually heal completely within a few weeks of completing radiotherapy.

What are some of the possible risks or complications?

The major goal of follow-up is, if possible, to detect and treat recurrences in the irradiated breast or lymph nodes and new cancers developing later in either breast before they can spread to other parts of the body. The routine use of bone scans, chest x-rays, blood tests and other tests to detect the possible spread to other organs in patients without symptoms does not appear to be useful. Your physician will determine a follow-up schedule for you. This may include a physical exam every few months for the first several years after treatment and then every six to 12 months or so after that. Annual follow-up mammograms are an important part of your care. If symptoms or clinical circumstances suggest a recurrence, diagnostic tests such as blood tests, ultrasound, computed tomography (CT), magnetic resonance imaging (MRI), chest x-ray (CXR), or bone scan may be needed. 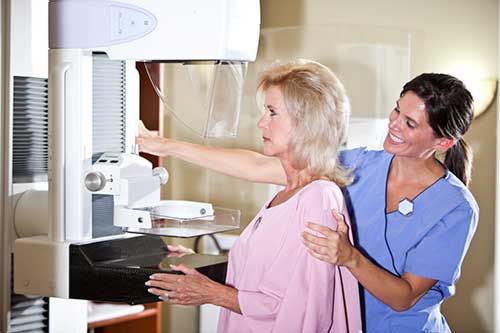