Cervical cancer is a malignant tumor that starts in the cells of the cervix. This is the lower part of the uterus that connects the uterus and the vagina. According to the American Cancer Society, cervical cancer is most frequently diagnosed in women between the ages of 35 and 44.

Most cervical cancers are the result of a previous infection with the human papilloma virus (HPV). HPV may be spread through vaginal, anal, or oral sex. HPV vaccination is recommended in adolescents age 11-12 prior to first sexual encounter. However, it is approved for adults up to the age of 26 and considered appropriate in some people up through 45. It is important to note that both men and women can receive the HPV vaccine. For women, regular gynecological care will also help reduce your risk for cervical cancer through routine pap smears and HPV testing. See the Cervical Cancer page for more information.

Cervical cancer treatment options depend on the stage of the tumor. The stage indicates if and how far cancer has spread to other parts of the body. Your doctor may use CT, MRI, chest X-ray or a PET scan to identify the stage of your cancer. This will help determine what treatments are available to you.

Your treatment may use one or more of these options. Your doctor will weigh the advantages and disadvantages of each option as they relate to your age, overall health, future childbearing plans and personal preferences.

For Stage 0 or precancerous disease, patients typically undergo one of the following procedures. These procedures allow women to become pregnant in the future:

Cryosurgery: During this procedure, gas is used to cool a metal probe. The probe is placed directly onto the cervix where it freezes and kills abnormal cells. See the Cryotherapy page for more information.

Laser Surgery: This procedure uses a focused laser beam to burn off abnormal cervical cells. It may also be used to remove a small piece of the cervix for further lab testing.

LEEP (loop electrosurgical excision procedure)/Conization: This procedure uses a wire loop heated by an electric current to remove abnormal cells from the cervix. In conization, the surgeon uses a scalpel to remove a cone shaped piece of abnormal tissue.

Under special circumstances, early stage cervical cancer patients, who want to become pregnant in the future may undergo:

The decision to proceed with surgery in patients who do not want to become pregnant depends on stage. Surgical options include:

Simple hysterectomy: This surgery removes the uterus and cervix but leaves the structures surrounding the uterus intact. No lymph nodes are removed. This eliminates any possibility of a future pregnancy.

Radical hysterectomy: This surgery removes the uterus, cervix, upper part of the vagina and some ligaments and tissue near the uterus. Pelvic lymph nodes also are removed. The ovaries are generally not removed. This eliminates any possibility of a future pregnancy.

Hysterectomies can be performed through:

Any removal of the uterus prevents a woman from becoming pregnant in the future.

This treatment administers drugs intravenously (by vein) or by mouth to kill cancer cells or to keep them from reproducing. IV chemotherapy is typically used in combination with radiation to decrease the chance of the disease returning elsewhere in the body. When chemotherapy is given with radiation for cervical cancer, it is given at a lower dose. This has been shown to help the radiation therapy work better. Like radiation therapy, chemotherapy can ease symptoms and increase survival for patients with tumors that have spread (metastasized). Patients usually receive chemotherapy over a set period of time with breaks in between to ease potential side effects. These effects may include abnormal blood-cell counts, fatigue, diarrhea, mouth sores and a compromised immune system.

Targeted therapy gives small amounts of manmade "monoclonal" antibodies to patients through intravenous (IV) infusion. Monoclonal antibodies mimic the body's natural antibodies that identify and fight foreign objects such as viruses and bacteria. Once inside the body, monoclonal antibodies latch onto substances on the surface of cancer cells. This kills the cancer cells or blocks their growth. Bevacizumab (Avastin®) is a common monoclonal antibody used for cervical cancer. Once inside the body, it binds to a protein called vascular endothelial growth factor and helps prevent the growth of new blood vessels that feed cancer cells. This therapy is generally used to treat cancer that has spread outside the cervix and its immediate area. It is also used to treat recurrent cervical cancer. Recent data suggests that Pembrolizumab (Keytruda®), an immune therapy, can be used in cervical cancers that make too much of the protein PDL-1. PDL-1 binds to the protein PD-1, which keeps your body from killing cancer cells. Pembrolizumab works by blocking this attachment. This therapy is used to treat cancer that has stopped responding to chemotherapy, cannot be removed by surgery, or has returned.

How can I choose from among the options?

If I choose surgery, will I need radiation therapy or vice versa?

Your doctor may recommend more treatment based on the results of surgery. Depending on what kind of surgery was performed, you may need more invasive surgery and/or radiation with chemotherapy. Chemotherapy helps radiation work better. This combination is used to treat most cervical cancer patients.

Radiation therapy alone is not typically used to treat cervical cancer. If your health prevents you from having surgery or chemotherapy, you may receive radiation on its own. For the most part, surgery is not an option for patients with advanced cervical cancer, where disease has spread to other parts of the body or is large in size.

How effective is modern radiation treatment of cervical cancer?

Modern technology and recent advances in treatment software allow doctors to deliver more of the radiation dose directly to the cervix and avoid surrounding healthy tissue. Doctors use various imaging techniques to visualize the cervix and surrounding tissue in three dimensions. This allows the radiation dose to be tailored more precisely to the individual patient's unique needs. Improved brachytherapy devices help minimize the radiation dose that will be delivered near the bladder and rectum. This reduces the risk of side effects and complications. The goal of treatment today is to safely provide a higher dose of radiation, to improve the chances of a cure.

Radiation therapy uses high-energy x-rays (photons). Used at high doses (many times those used for x-ray imaging exams), it can destroy cancer cells with each treatment. This happens at a microscopic level. Patients do not feel the radiation during treatment. They will only hear some electrical noise from the machine and may notice safety warning lights in the room.

As treatment progresses, you may become tired. Adequate rest is important, you should try to stay as active as you can. You may have upset stomach, diarrhea or loose stools (if radiation is given to the pelvis or abdomen), nausea and vomiting during EBT. Some patients will have skin changes or irritation in the area where the radiation has passed through the skin to the cancer. If the irritation leads to peeling, you must be careful to clean and protect the area to avoid infection.

Other side effects from EBT include:

Women undergoing brachytherapy often see similar side effects to those associated with EBT. These may include fatigue, diarrhea, nausea, irritation of the bladder and low blood counts. Also, because the radiation used in brachytherapy only travels a short distance, the vagina and the vulva may become red and sore and have a discharge. Patients often receive brachytherapy and EBT close together. This may make it more difficult to tell which treatment is causing the side effects.

These side effects generally last two to three weeks after treatment is over. However, there are some long-term side effects that may or may not resolve.

Once treatment is complete, you and your treatment team will decide on a follow-up plan. Early stage cancers will likely require follow up with your gynecologist oncologist. These appointments should be done every three months for the next two years and every six months for the following three years. Exams are performed annually thereafter. You will also need to have an annual pap smear test (including patients who have had a hysterectomy). Patients with more advanced cancer will need to be followed by both your gynecologist oncologist and radiation oncologist. These appointments will start within weeks of finishing your treatment to address any side effects. Once it is determined that the treatment has worked, your visits will be spaced further apart. At these visits, your doctor may order PET or CT scans. See the PET/CT Scan page for more information. 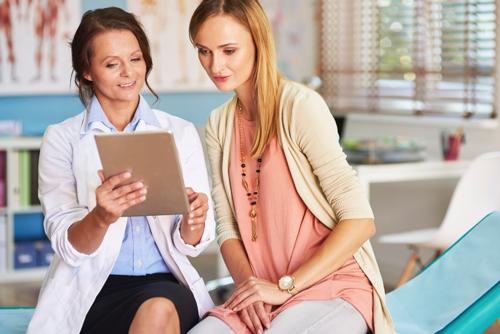