Crohn's disease causes inflammation and irritation in the gastrointestinal tract, most commonly in the end part of the small intestine (ileum). Unexplained abdominal pain, diarrhea, rectal bleeding, weight loss and fever are all symptoms of Crohn's disease and are very similar to those of ulcerative colitis.

Your doctor will likely perform a physical exam to evaluate your condition and use blood and stool tests to look for signs of bleeding and rule out other underlying causes, such as infection. You may also undergo flexible sigmoidoscopy, colonoscopy, body CT, body MRI, MR enterography, upper GI, small bowel follow-through, or lower GI to confirm a diagnosis. No cure exists for Crohn's disease, but your doctor may prescribe medications, surgery or a special diet to help manage your condition.

What is Crohn's disease?

Crohn's disease is a type of inflammatory bowel disease (IBD) that causes inflammation and irritation in the gastrointestinal (GI) tract. It occurs most commonly in the end part of the small intestine, called the ileum.

The most common symptoms of Crohn's disease are abdominal pain, often in the lower right abdomen area, and diarrhea. Other symptoms include:

Symptoms of Crohn's disease result from an inappropriate activation of the immune system. The causes are unknown, but there is evidence that genetics plays a significant role.

Crohn's disease can affect both children and adults. Approximately 20 percent of those diagnosed have symptoms before age 20.

How is Crohn's disease diagnosed and evaluated?

Your primary doctor will begin by asking about your medical history and symptoms. You will also undergo a physical exam.

Blood and stool tests can be used to look for signs of bleeding and rule out other causes of GI diseases, such as infection.

Other common tests for Crohn's disease include:

Infants and young children often require sedation or anesthesia to complete an MRI exam without moving. This depends on the child's age, intellectual development, and the type of exam. Sedation can be provided at many facilities. A specialist in pediatric sedation or anesthesia should be available during the exam for your child's safety. You will be told how to prepare your child.

Some facilities may have personnel who work with children to help avoid the need for sedation or anesthesia. They may prepare children by showing them a model MRI scanner and playing the noises they might hear during the exam. They also answer any questions and explain the procedure to relieve anxiety. Some facilities also provide goggles or headsets so the child can watch a movie during the exam. This helps the child stay still and allows for good quality images.

Infants and children may undergo upper and lower GI radiography. Usually, there is no special preparation, but your doctor will give you detailed instructions if needed. The use of barium and the means of capturing x-ray images are similar to that described for adults.

How is Crohn's disease treated?

Though no cure exists for Crohn's disease, treatment can improve symptoms, control inflammation and correct nutritional deficiencies. Among the common treatments options are: 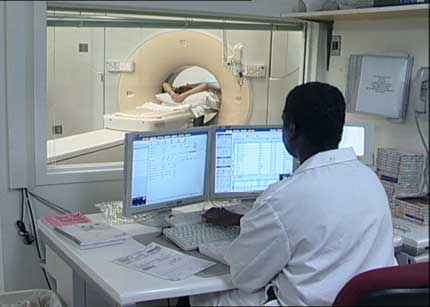