What is Esophageal Cancer?

Esophageal cancer occurs when cancer cells develop in the esophagus, a long, tube-like structure that connects the throat and the stomach. The esophagus, which carries swallowed food to the stomach, is part of the upper digestive system. The wall of the esophagus consists of several layers of tissue.

There are two main types of esophageal cancer, including:

In the early stages of esophageal cancer, there may be no symptoms. In more advanced cancers, symptoms may include:

Surgery to remove the cancer may be used alone for early stage disease or in combination with other therapies for advanced disease. If the cancer is a small tumor confined to the first layer of the lining in the esophagus, the surgeon may remove the tumor and a small amount of surrounding healthy tissue (called a margin).

Endoscopic treatments, which are used to treat early and pre-cancers of the esophagus and for pain relief (called palliative treatment), include:

Monoclonal Antibody Therapy (also called targeted therapy): A small number of esophageal cancers have too much of a protein called HER2 on the surface of their cells. A drug known as trastuzumab (Herceptin), is a monoclonal antibody that attaches to the HER2 protein on cancer cells and interferes with their ability to grow. This targeted therapy may be combined with chemotherapy.

Radiation therapy: This cancer treatment that uses high-energy x-rays or other types of radiation to kill cancer cells.

Radiation therapy is usually combined with chemotherapy and surgery to treat patients with esophageal cancer and is often used for patients who are not candidates for surgery. For patients undergoing surgical treatment for esophageal cancer, radiation therapy may be used before surgery to help shrink the cancer (called neoadjuvant treatment) or after surgery, to destroy any remaining cancer cells (called adjuvant therapy). It may also be used to help manage the symptoms and complications of advanced disease, including pain and tumor growth that prohibits food from passing to the stomach.

Prior to beginning radiation therapy, some patients who cannot swallow may have a feeding tube inserted into their esophagus. This tube, called an esophageal stent, allows the esophagus to remain open.

The treatment process for external beam therapy begins with simulation and treatment planning.

For treatment planning, computed tomography (CT), position emission tomography (PET) and magnetic resonance imaging (MRI) images will be obtained to map the location of the cancer and healthy tissues nearby. Using these images and sophisticated treatment planning tools, a team of professionals including a dosimetrist, radiation physicist and radiation oncologist generate a treatment plan that will deliver the appropriate radiation dose to the tumor while minimizing exposure to surrounding normal tissues.

After the simulation and planning have been completed, the treatment can begin.

External beam radiation therapy can also be delivered using beams of a charged particle called a proton, which are typically generated by a machine called a cyclotron.

Before each radiation therapy session, the patient may be asked to change into a gown. The patient is then placed on the treatment couch in exactly the same position that was used for simulation using the immobilization devices. The therapist goes outside the room and turns on the linear accelerator from outside.

Patients undergo radiation therapy during a series of outpatient treatments over several weeks. The patient's diagnosis determines the total duration of treatment. Each treatment session lasts less than an hour, most of which is spent positioning the patient.

Radiation treatment can cause side effects. These problems may result from the treatment itself or from radiation damage to healthy cells in the treatment area.

The number and severity of side effects will depend on the type of radiation, dose, and body part under treatment. Talk to your doctor and/or nurse so they can help manage them.

Radiation can cause early and late side effects. Early side effects happen during or right after treatment. They are typically gone within a few weeks. Common early side effects include fatigue and skin problems. Skin in the treatment area may become sensitive, red, irritated, or swollen. Other changes include dryness, itching, peeling, and blistering.

Depending on the area being treated, other early side effects may include:

Late side effects may occur months or years following treatment. While they are often permanent, they are rare. They include:

There is a slight risk of developing cancer from radiation therapy. After treatment, your radiation oncologist will regularly check for complications and recurrent or new cancers.

Patients undergoing external beam radiation treatment typically experience difficult and painful swallowing soon after starting treatment. This occurs as a result of the radiation killing the cells in the lining of the esophagus, which causes a reaction similar to a sunburn. It is important for patients to drink plenty of water and to meet their nutritional needs during this time. When patients cannot get adequate nutrition and hydration, a feeding tube may need to be inserted before or during radiation treatment until the patient regains the ability to swallow. Once treatment is completed, the pain usually subsides within a few weeks.

Other common side effects of radiation therapy include:

Most of these side effects go away within two months after radiation therapy is finished.

Patients should talk to their doctor before and during treatment about the side effects they can expect and ways to minimize them. 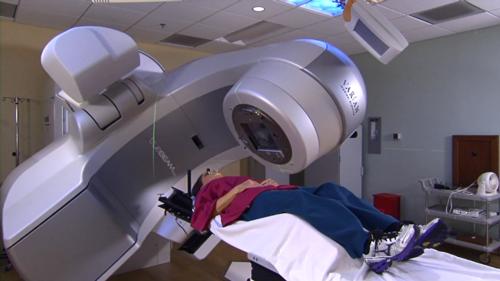