Lung cancer is a leading cause of cancer-related death in the United States. Many lung cancers are preventable. Inhaling cancer-causing substances such as tobacco smoke may lead to lung tissue changes shortly after exposure — so-called precancerous changes. Nevertheless, cancer typically develops over a period of many years. If detected early enough, it can often be successfully treated.

Tumor genomic testing is now standard of care for many lung tumors. These tests help your doctor select the most appropriate treatment for your condition. Your doctor may treat early-stage lung cancer with standard treatments such as surgery or radiation therapy.

Besides attacking the tumor, radiotherapy can help relieve symptoms such as bleeding, cough, and pain. When used as an initial treatment instead of surgery, radiotherapy may be given alone or combined with chemotherapy. Patients who have a small, localized lung cancer, but are not candidates for surgery, may receive stereotactic body radiation therapy (SBRT). Patients who are poor candidates for surgery include the elderly, patients with chronic heart failure, and patients on blood thinning drugs that put them at risk of surgical bleeding. SBRT uses small, focused radiation beams that track the lung tumor along with its respiratory movement. It typically uses three to five treatments to deliver very high doses of radiation to patients with localized, early-stage lung cancer who cannot have surgery. See the SRS and SBRT page for more information.

Most often, radiation therapy uses the external beam technique, which aims a beam of x-rays or protons directly at the tumor. Treatment is given in a series of sessions over six to seven weeks. For more detailed information, see the External Beam Therapy (EBT) page. Three-dimensional conformal radiation therapy or intensity-modulated radiation therapy (IMRT) use a 3-D image of the tumor taken with CT scanning. This image serves as the target for a high-dose radiation beam that can change in shape and size to match the tumor. This method minimizes radiation exposure of nearby normal lung tissue. See the Intensity-Modulated Radiation Therapy (IMRT) page for more information.

Proton therapy uses protons instead of x-rays. Protons can pass through healthy tissue without damaging it.

How does the treatment method depend on the type of lung cancer?

There are two main types of lung cancer that have different microscopic appearances:

How does the stage of disease guide lung cancer treatment?

Radiotherapy or chemotherapy may help to reduce pain or other symptoms for disease recurrence or disease that persists after initial treatment. Radiotherapy or laser treatment can keep the airways open, allowing the patient to breathe more freely.

How effective is treatment for inoperable lung cancer?

It is extremely important to remember that “inoperable” does not mean “incurable” when it comes to lung cancer. In fact, an increasing number of patients are being treated with a non-surgical approach across all stages of this disease. Treatment effectiveness depends on the stage of disease. In early stage inoperable disease that is treated with radiotherapy alone, control of the local disease is typical. In more advanced disease, a combination of chemotherapy and radiation is delivered with curative intent. Cure rates are lower but still possible with disease spread to the lymph nodes within the chest. The medical or radiation oncologist may propose a combination of chemotherapy and radiation therapy for a patient who is otherwise well.

When cure is not a possibility, doctors recommend palliative treatment. This is the use of medications, chemotherapy, radiation therapy, or other measures to relieve symptoms of lung cancer without eliminating the tumor. The doctor will use smaller doses of radiation therapy to avoid side effects. At some point, if you and your oncologist or primary care physician agree that active treatment is no longer advisable, hospice care can provide comfort and support.

Pain relief is a very important part of treating lung cancer. Although many effective treatments are available, and there are devices for delivering medication on demand without overdosing, many cancer patients still do not receive adequate pain relief. When the needs of the patient are clearly expressed, doctors can better provide appropriate care.

Radiation therapy delivers focused high-energy x-rays (photons), gamma rays, or atomic particles. It affects cells that are rapidly dividing—such as cancer cells—much more than those that are not. Most cancers, including lung tumors, are made of cells that divide more rapidly than those in normal lung tissue. This means the tumor may be eliminated without damaging surrounding normal tissues. Radiotherapy acts by attacking the DNA within tumor cells, making it impossible for them to grow and create more cancer cells. Normal body cells may also be damaged, but they are able to repair themselves and function properly once again. The key is to give daily doses of radiation large enough to kill a high percentage of the rapidly dividing cancer cells, while minimizing damage to the more slowly dividing normal tissue cells in the same area.

Once radiotherapy ends, your doctor will want to see you after four to six weeks and then every three to six months for the first two years. After this, you may see the doctor every six months for three years and then once a year. Your medical or radiation oncologist will often prescribe a computed tomography (CT) or positron emission tomography (PET) scan. This will take place about four to eight weeks after treatment ends, when the response is expected to be the greatest. These images will help to assess response and make it possible to do comparisons with earlier images. It also allows your doctor to find treatment-related complications at an early stage. Imaging can tell the difference between recurrent cancer and lung scars produced by high-dose radiation treatment. By obtaining chest imaging on a regular basis, (generally no more than two to four times per year), recurrent cancers may be discovered in time to be successfully re-treated.

In addition to x-rays, other tests such as blood cell counts and bronchoscopy may be a routine part of the follow-up exam. Your doctor may use other tests to follow up on symptoms or findings on chest imaging. If new symptoms develop in another part of the body, your doctor may test to detect any potential problem.

After treatment, the tumor may be gone (cured). Or it can regrow in an area of the original tumor (recur) or remain after treatment (residual tumor). Patients who have had one cancer may develop a second, unrelated primary lung cancer. This happens to about 3 percent of patients per year. 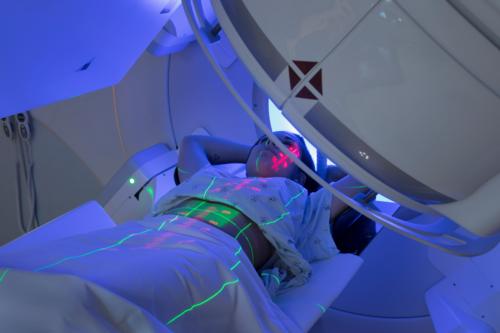