Ultrasound imaging of the head uses sound waves to produce pictures of the brain and cerebrospinal fluid. It is usually performed on infants, whose skulls have not completely formed. A transcranial Doppler ultrasound evaluates blood flow in the brain's major arteries. Ultrasound is safe, noninvasive, and does not use ionizing radiation.

This procedure requires little to no special preparation. Your doctor will tell you how to prepare. If you are an adult, you should not use nicotine-based products that may cause blood vessels to constrict. Leave jewelry at home and wear loose, comfortable clothing. You may need to change into a gown for the procedure.

What is cranial ultrasound?

Head and transcranial Doppler are two types of cranial ultrasound exams used to evaluate brain tissue and the flow of blood to the brain, respectively.

A head ultrasound examination produces images of the brain and the cerebrospinal fluid that flows and is contained within its ventricles, the fluid filled cavities located in the deep portion of the brain. Since ultrasound waves do not pass through bone easily, this exam is most commonly performed on infants, whose skulls have not completely formed. The gaps between those skull bones provide a "window," allowing the ultrasound beam to freely pass into and back from the brain. The ultrasound probe and some gel are placed on the outside of the head in one of those regions without bone.

A transcranial Doppler (TCD) ultrasound evaluates both the direction and velocity of the blood flow in the major cerebral arteries of the brain. This type of ultrasound exam is also used during surgical procedures to monitor blood flow in the brain. TCD may be used alone or with other diagnostic exams such as magnetic resonance imaging (MRI), magnetic resonance angiography (MRA) and computed tomography (CT) scans.

Ultrasound imaging is a noninvasive medical test that helps physicians diagnose and treat medical conditions. It is safe and painless. It produces pictures of the inside of the body using sound waves. Ultrasound imaging is also called sonography. It uses a small probe called a transducer and gel placed directly on the skin. High-frequency sound waves travel from the probe through the gel into the body. The probe collects the sounds that bounce back. A computer uses those sound waves to create an image. Ultrasound exams do not use radiation (x-rays). Because ultrasound captures images in real-time, it can show the structure and movement of the body's internal organs. The images can also show blood flowing through blood vessels.

Head ultrasound is a routine exam for infants who were born prematurely. The procedure is used to screen for brain conditions associated with prematurity, such as bleeding or brain tissue damage as described below. If detected, follow-up ultrasound exams will be performed.

In infants, head ultrasound is used to:

In adults, head ultrasound is used to locate and evaluate tumor masses during brain surgery, facilitating their safe removal.

Transcranial Doppler ultrasound is used to assess the risk of stroke in adults and children with sickle cell disease. It is also used to measure conditions affecting blood flow to and within the brain, such as:

No special preparation is required prior to head or transcranial Doppler ultrasound exams. However, the patient should wear comfortable, loose-fitting clothing

Adults may be asked to stop using nicotine-based products 30 minutes to two hours prior to a transcranial Doppler ultrasound exam. Products with nicotine may cause blood vessels to constrict and give inaccurate results.

Your doctor will provide specific instructions for you or your child prior to the exam.

Doppler ultrasound, a special ultrasound technique, measures the direction and speed of blood cells as they move through vessels. The movement of blood cells causes a change in pitch of the reflected sound waves (called the Doppler effect). A computer collects and processes the sounds and creates graphs or color pictures that represent the flow of blood through the blood vessels.

A head ultrasound is performed in the neonatal intensive care unit (NICU) at the infant's bedside. The infant is positioned lying face-up. A clear, water-based gel is applied to the transducer to help the transducer make secure contact with the body and eliminate air pockets that can block the sound waves from passing into the body. The sonographer (ultrasound technologist) or radiologist then gently presses the transducer against the fontanelle (soft spot of the infant's head, which has no bone to block the passage of the sound waves).

If head ultrasound is used during brain surgery, a portion of the skull will be removed and the exposed brain examined for brain masses with the use of a transducer.

During a transcranial Doppler ultrasound, the patient is either positioned on his or her back on an examination table or seated upright in an examination chair. A clear water-based gel is applied on the back of the neck, above and lateral to the cheek bone, in front of the ear or over the eyelid, as these are sites for blood vessels that supply the brain. The transducer is gently pressed over one of these areas to measure the direction and speed of the flowing blood.

The patient will need to remain still during the examination, which may take up to 35 minutes. However, if the patient needs to adjust his or her position on the examination table, there is usually no problem in pausing for that time. If the examination is being performed on an infant, a nurse or radiologic technologist may assist with keeping the infant still to ensure the best imaging quality.

Most ultrasound exams are painless, fast, and easily tolerated.

There may be minimal discomfort from pressure, as the transducer is pressed against the area being examined. If the gel is not warmed prior to contact with the skin, it could produce a cold sensation.

If the doctor performs a Doppler ultrasound exam, you may hear pulse-like sounds that change in pitch as they monitor and measure the blood flow.

Once the imaging is complete, the technologist will wipe off the clear ultrasound gel from your skin. Any portions that remain will dry quickly. The ultrasound gel does not usually stain or discolor clothing.

After an ultrasound exam, you should be able to resume your normal activities immediately.

What are the limitations of cranial ultrasound?

Ultrasound examinations are very sensitive to motion, and an active or crying child will slow the examination process.

Large patients are more difficult to image by ultrasound, because greater amounts of tissue weaken the sound waves as they pass deeper into the body.

Exam results could be altered, due to: 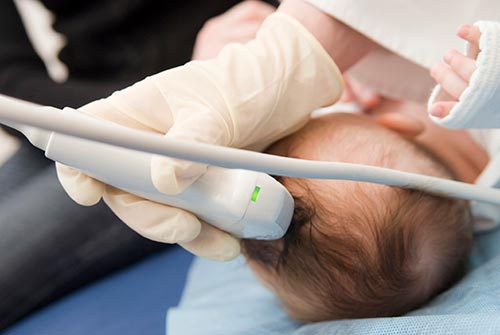