An ultrasound-guided breast biopsy uses sound waves to help locate a lump or abnormality and remove a tissue sample for examination under a microscope. It is less invasive than surgical biopsy, leaves little to no scarring and does not involve exposure to ionizing radiation.

Tell your doctor about any recent illnesses or medical conditions and whether you have any allergies, especially to anesthesia. Discuss any medications you're taking, including herbal supplements and aspirin. You will be advised to stop taking aspirin or blood thinner three days before your procedure. Leave jewelry at home and wear loose, comfortable clothing. You may be asked to wear a gown. If you are to be sedated, plan to have someone drive you home afterward.

What is Ultrasound-Guided Breast Biopsy?

Physical, mammography, and other exams often detect lumps or abnormalities in the breast. However, these tests cannot always tell whether a growth is benign or cancerous.

Doctors use breast biopsy to remove a small amount of tissue from a suspicious area for lab analysis. The doctor may perform a biopsy surgically. More commonly, a radiologist will use a less invasive procedure that involves a hollow needle and image-guidance. Image-guided needle biopsy does not remove the entire lesion. Instead, it obtains a small sample of the abnormality for further analysis.

In ultrasound-guided breast biopsy, ultrasound imaging is used to help guide the radiologist's instruments to the site of the abnormal growth.

An ultrasound-guided breast biopsy can be performed when a breast ultrasound shows an abnormality such as:

There are times when your doctor may decide that ultrasound guidance for biopsy is appropriate even for a mass that can be felt.

Wear comfortable, loose-fitting clothing. You may need to remove all clothing and jewelry in the area to be examined.

You may need to change into a gown for the procedure.

Prior to a needle biopsy, tell your doctor about all the medications you take, including herbal supplements. List any allergies, especially to anesthesia. Your doctor may advise you to stop taking aspirin, blood thinners, or certain herbal supplements three to five days before your procedure. This will help decrease your risk of bleeding.

Also, inform your doctor about recent illnesses or other medical conditions.

You may want to have someone drive you home afterward, especially if you receive sedation.

The doctor will use one of four instruments:

This procedure may use other sterile equipment, including syringes, sponges, forceps, scalpels, and a specimen cup or microscope slide.

Using an ultrasound probe to visualize the location of the breast mass, distortion or abnormal tissue change, the radiologist inserts a biopsy needle through the skin, advances it into the targeted finding and removes tissue samples. If a surgical biopsy is being performed, ultrasound may be used to guide a wire directly into the targeted finding to help the surgeon locate the area for excision. With continuous ultrasound imaging, the physician is able to view the biopsy needle or wire as it advances to the location of the lesion in real-time.

Image-guided, minimally invasive procedures such as ultrasound-guided breast biopsy are most often performed by a specially trained radiologist.

Breast biopsies are usually done on an outpatient basis.

You will be positioned lying face up on the examination table or turned slightly to the side.

The doctor will inject a local anesthetic into the skin and more deeply into the breast to numb it.

Pressing the transducer to the breast, the sonographer or radiologist will locate the lesion.

The doctor will make a very small nick in the skin at the site where they will insert the biopsy needle.

The radiologist, monitoring the lesion site with the ultrasound probe, will insert the needle and advance it directly into the mass.

The doctor removes tissue samples using one of three methods:

After this sampling, the doctor will remove the needle.

If a surgical biopsy is to be performed, the doctor will insert a wire into the suspicious area as a guide for the surgeon.

The doctor may place a small marker at the biopsy site so they can locate it in the future if necessary.

Once the biopsy is complete, the doctor or nurse will apply pressure to stop any bleeding. They will cover the opening in the skin with a dressing. No sutures are needed.

The doctor may use mammography to confirm that the marker is in the proper position.

This procedure is usually completed within an hour.

You will be awake during your biopsy and should have little discomfort. Many women report little pain and no scarring on the breast. However, certain patients, including those with dense breast tissue or abnormalities near the chest wall or behind the nipple, may be more sensitive during the procedure.

When you receive the local anesthetic to numb the skin, you will feel a pin prick from the needle followed by a mild stinging sensation from the local anesthetic. You will likely feel some pressure when the doctor inserts the biopsy needle and during tissue sampling. This is normal.

The area will become numb within a few seconds.

You must remain very still while the doctor performs the imaging and the biopsy.

As tissue samples are taken, you may hear clicks or buzzing sounds from the sampling instrument. These are normal.

If you experience swelling and bruising following your biopsy, your doctor may tell you to take an over-the-counter pain reliever and to use a cold pack. Temporary bruising is normal.

Call your doctor if you experience excessive swelling, bleeding, drainage, redness, or heat in the breast.

If a marker is left inside the breast to mark the location of the biopsied lesion, it will cause no pain, disfigurement, or harm. Biopsy markers are MRI compatible and will not cause metal detectors to alarm.

Avoid strenuous activity for at least 24 hours after the biopsy. Your doctor will outline more detailed post-procedure care instructions for you.

A pathologist examines the removed specimen and makes a final diagnosis. Depending on the facility, the radiologist or your referring physician will share the results with you. The radiologist will also evaluate the results of the biopsy to make sure that the pathology and image findings explain one another. In some instances, even if cancer is not diagnosed, surgical removal of the entire biopsy site and imaging abnormality may be recommended if the pathology does not match the imaging findings.

What are the limitations of Ultrasound-Guided Breast Biopsy?

Breast biopsy procedures will occasionally miss a lesion or underestimate the extent of disease present. If the diagnosis remains uncertain after a technically successful procedure, surgical biopsy will usually be necessary.

The ultrasound-guided biopsy method cannot be used unless the lesion can be seen on an ultrasound exam. Clustered calcifications are not shown as clearly with ultrasound as with x-rays.

Very small lesions may be difficult to target accurately by ultrasound-guided core biopsy. 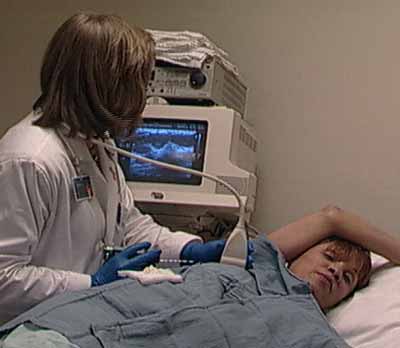