Carotid artery stenosis is a narrowing of the large arteries on either side of the neck. These arteries carry blood to the head, face, and brain. This narrowing is usually the result of a build-up of plaque within the arteries, a condition called atherosclerosis. Stenosis can worsen over time to completely block the artery which may lead to stroke.

Your doctor may use carotid ultrasound, CT angiography (CTA), magnetic resonance angiography (MRA), or cerebral angiography to determine the presence, location, and severity of stenosis. Treatment to improve or restore blood flow may include angioplasty and vascular stenting or, in severe cases, surgery.

What is carotid artery stenosis?

Carotid artery stenosis is a narrowing in the large arteries located on each side of the neck. These arteries carry blood to the head, face, and brain. The narrowing usually results from atherosclerosis, or a build-up of plaque on the inside of the arteries. Over time, stenosis can advance to complete blockage of the artery.

Some people with carotid artery stenosis may experience dizziness, fainting, and blurred vision. These may be signs that the brain is not receiving enough blood. In many cases, the first symptom is a stroke or transient ischemic attack (TIA). A small blood clot can form in the artery narrowed by atherosclerosis. The clot can become dislodged and travel into the brain. Once there, it can plug up a smaller artery that the brain depends on to function and survive. Symptoms of a TIA and stroke are similar: paralysis or numbness on one side of the body, blurred vision, headache, trouble speaking, and difficulty responding to others. A TIA is usually brief and leaves no lasting damage. It is due to a temporary occlusion of a small artery. This is often a warning sign. A stroke is often associated with permanent injury of a part of the brain due to loss of blood supply. This can result in mild-severe disability or death.

How is carotid artery stenosis diagnosed and evaluated?

Carotid artery stenosis sometimes causes an abnormal sound, or bruit, in the artery that your doctor can hear with a stethoscope. Imaging tests to diagnose, localize and measure stenosis include:

How is carotid artery stenosis treated?

If blockage is mild to moderate, lifestyle modification and certain medications may be recommended to slow the progression of atherosclerosis:

If blockage is severe, surgical treatment may be recommended: 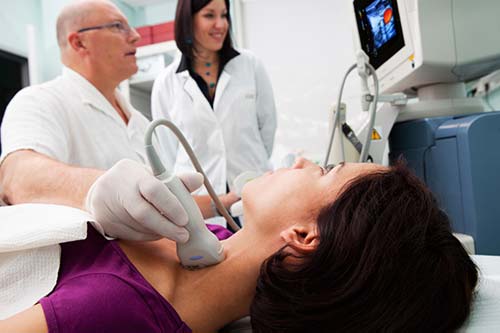