The way a particular head and neck cancer behaves depends on the site in which it arises (the primary site). For example, cancers that begin in the vocal cords behave very differently than those that arise in the back of the tongue, which is only an inch or less from the vocal cords.

The most common type of cancer in the head and neck is squamous cell carcinoma, which arises from the cells that line the inside of the nose, mouth and throat. Squamous cell cancer is often associated with a history of smoking or exposure to the human papilloma virus (HPV). Other less common types of head and neck cancers include salivary gland tumors, lymphomas, and sarcomas. Methods of prevention include avoiding exposure to alcohol and tobacco products as well as vaccinating children and young adults against HPV.

Cancers spread in four main ways. The first is direct extension from the primary site to adjacent areas. The second is spread through the lymphatic channels to lymph nodes. The third is spread along nerves (perineural spread) to other areas of the head and neck. The fourth is spread through the blood vessels to distant sites in the body. In head and neck cancer, spread to the lymph nodes in the neck is relatively common.

The lymph nodes most commonly involved depend on the location from which the primary tumor arises. Most lymph nodes are located along major blood vessels underneath the sternocleidomastoid muscle on each side of the neck. The risk of spread to other parts of the body through the bloodstream is closely related to whether the cancer has spread to the lymph nodes in the neck, how many nodes are involved, and their location in the neck. The risk is higher if cancer is in lymph nodes in the lower part of the neck rather than only in those located in the upper neck.

The diagnosis of cancer of the head and neck is often made by a dentist, oral surgeon or physician after a patient notices symptoms such as a lump in the neck or a sore in the mouth that does not heal. Even without symptoms, the diagnosis may be made during a routine examination.

Radiation therapy, surgery, and chemotherapy are the three main treatments for head and neck cancer. Either radiation therapy, surgery, or both combined are typically used as the primary treatments with the goal of killing or removing the cancer. Chemotherapy is often used as an additional, or adjuvant, treatment. The optimal combination of the three treatment modalities for a patient with a particular head and neck cancer depends on the site of the cancer and the stage (extent) of the disease.

In some situations, a surgeon may remove the primary tumor. Radiation may be given afterward, if necessary. In other situations, the cancer is too advanced and it is not feasible to completely remove the cancer with surgery initially. Radiotherapy may then be given first to try to shrink the tumor, and surgery may follow radiotherapy.

Recent studies indicate that chemotherapy given at the same time as radiation therapy is more effective than if it is given before a course of radiation therapy. Therefore, radiation treatment schedules sometimes include chemotherapy if the stage of the cancer is advanced (advanced stage III or stage IV). Drugs most commonly given in conjunction with radiation therapy are cisplatin (Platinol) and Cetuximab (Erbitux). Occasionally, other drugs may include fluorouracil (5-FU, Adrucil), carboplatin (Paraplatin), and paclitaxel (Taxol). This is only a partial list of chemotherapy agents; your physicians may choose to use others. The chemotherapy may be given in a variety of ways, including a low daily dose, a moderately low weekly dose, or a relatively higher dose every three to four weeks.

Typically, one of the following radiation therapy procedures may be used to treat Head and Neck Cancer:

The initial visit to the radiation oncologist is for a consultation, when the radiation oncologist will listen to the history of your problem and perform a physical examination. Consultations with other members of the head and neck team, such as the head and neck surgeon, medical oncologist, pathologist, radiologist and dentist, usually take place at this time or shortly after. It is important to have the input of various members of the team who will be taking care of you before a treatment plan is decided and treatment begins.

After the recommended treatment and possible options are explained to you and you decide on a course of treatment in conjunction with your doctors, a date will be selected for treatment planning for radiation therapy (if radiation therapy has been selected as the first or next step in your treatment). You then have what is called a "simulation" using either conventional radiographs (x-rays) or a computed tomography (CT) scan. These radiographic studies are used to plan the type and direction of radiation beams used to treat the cancer. Customized lead alloy blocks or a special collimator (multileaf collimator) in the treatment machine will shape the radiation beams to block areas that do not need to be treated. Treatment fields then will be aligned, and the treatment course will start one to two weeks after the initial treatment-planning session. There is significant medical physics involvement in the planning and verification of the plan before it is actually delivered to the patient.

Typically, treatments are given once or twice a day, five days a week for five to seven weeks, depending on the treatment schedule selected by your radiation oncologist. Generally, for the first couple of days of treatment planning and treatment start, your visit to the radiation oncology department may take an hour or two. Thereafter, each individual treatment takes a shorter amount of time, which varies depending on the complexity of the set-up. You will not feel or see anything during a radiation treatment, although the machine makes a sound that may be heard during the treatment.

The side effects depend on the site and extent of the head and neck cancer and whether it is done in conjunction with chemotherapy. In general, radiation therapy of the head and neck does not cause nausea, but a few patients do experience nausea during treatment. Many effective antiemetics (drugs that alleviate nausea) can relieve this symptom if it should occur. Chemotherapy will cause its own side effects which will be discussed with the medical oncologist.

If your sore throat is severe, you may be unable to take in enough food and liquids by mouth to maintain your weight or avoid dehydration. Your doctors will then insert a feeding tube temporarily into your stomach (a gastrostomy tube), which will allow you to maintain adequate nutrition without having to swallow all of the food that you need. Gastrostomy placement is usually an outpatient procedure. It is important, though, to continue swallowing even with a gastrostomy tube in place. Otherwise, your swallowing muscles may weaken; this would cause permanent swallowing problems and make it difficult to stop using the gastrostomy tube even after the radiation treatment course is completed.

A dietitian should be involved in your care during the course of radiation treatments to help you maintain adequate caloric intake and hydration. When side effects occur, it may be tempting to take a break from treatments. This is not a good idea. The "acutely responding" normal tissues—such as the skin and the lining of the throat—that are responsible for the side effects during radiation therapy tend to respond to radiation as do cancer cells. If the treatment produces few acute side effects, it is also not likely to be very effective against the cancer. Therefore, the treatment of most head and neck cancers represents a classic "no pain, no gain" situation. Breaks in the treatment course to lessen the side effects give the cancer a chance to regrow and will significantly reduce the likelihood of cure. Medications that are almost always needed during a course of radiation therapy include pain medicines, analgesic "magic mouthwash" for the sore throat to help swallowing, possibly antiemetics if nausea is a problem and possibly stool softeners to counteract some pain medication effects.

What are some of the possible risks or complications?

Palliative courses of treatment generally entail giving a moderate dose of radiation over a short time. This provides a relatively high chance of shrinking the tumor and lessening symptoms while exposing the patient to less risk of side effects and complications, and requiring a relatively brief time to complete the therapy. A typical course of palliative radiation treatments would be divided into 10 treatments given over two weeks.

On the other hand, if there is a reasonable chance of cure (the definition of reasonable can vary, depending on the situation, but generally at least 5 percent to 10 percent), then a longer and more arduous course of treatment is generally planned. The risks associated with treatment depend on the location and extent of the tumor and the normal structures that are nearby.

In general, for any type of treatment, the treating physician tries to estimate the potential risk of a major complication; if this risk is similar to or exceeds the anticipated likelihood of cure, then the treatment plan is modified. However, if the likelihood of cure is significantly greater than the risk of a major complication, then treatment is initiated.

There are several reasons for follow-up examinations:

If the initial treatment for the cancer is successful and you are cured, there is still a relatively low risk (2 percent to 3 percent per year) of developing a new, completely unrelated head and neck cancer. Per the National Comprehensive Cancer Network guidelines, follow-up examinations usually take place:

Thyroid functions are often checked annually to detect any occurrence of hypothyroidism (decreased thyroid function), which is easily treatable.

Continued imaging follow-up is typically performed both to assess the response to treatment and to monitor for disease recurrence. CT scans are most commonly performed for this purpose, however, MRI and fluorodeoxyglucose (FDG) positron emission tomography (PET) may also be performed in certain situations.

Some new treatments are available, as are new ways of combining old treatments. A good example of the latter is the use in recent years of a combination of radiation therapy and chemotherapy or immunotherapy for advanced head and neck cancer. For updated information on new cancer treatments that are available, you should discuss these issues with your doctor and consider obtaining a second opinion before beginning treatment. 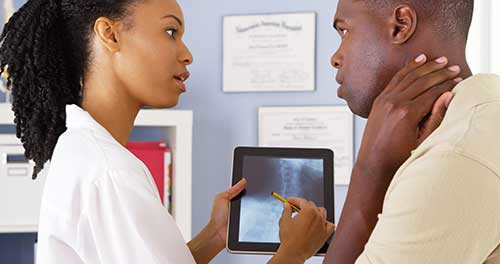