A head injury occurs as a result of trauma to the scalp, skull or brain and may be classified as closed (no cut to the skin) or penetrating (skin and/or bone of the skull is broken). Head injury symptoms may occur immediately following trauma or develop slowly over time.

Your doctor may perform a physical and neurologic exam along with head CT, head MRI or head x-ray to assess the nature and severity of your injury and determine appropriate treatment. While patients with minor head injuries may be observed and treated with medication, more serious traumatic brain injuries may require emergency care to remove blood clots or relieve pressure on the brain.

What is a head injury?

The symptoms of a head injury may occur immediately following trauma, or they may develop slowly over several hours or days. Specific types and symptoms of head injuries include:

In infants and toddlers who cannot communicate, signs of a head injury include:

Patients who exhibit symptoms of a head injury should seek immediate medical attention.

How is a head injury evaluated?

The treatment of head injuries depends on the type of injury and the patient's condition. To assess the severity of a head injury, a physician may perform a physical and neurologic exam and imaging tests such as:

How is a head injury treated?

Consider seeking immediate medical attention with any form of head injury as the consequences of unrecognized or inappropriately treated head injury may be potenaatially serious.

Patients with minor head injuries will be observed and treated for symptoms, including pain medication for headache and medications to control nausea and vomiting. If you have symptoms of a simple concussion, you should avoid being overly active. Your physician will advise you as to when you can return to your normal daily routine and sporting activities.

More serious, traumatic brain injuries will require individualized and often emergency care, such as surgery to remove blood clots and relieve pressure on the brain. 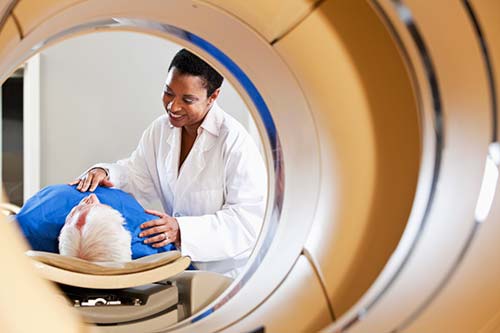 Radiologist preparing a patient for a computed tomography (CT) exam.