Dementia refers to a group of symptoms that indicate brain function has been damaged. The condition is characterized by a decline in language, learning and/or memory that is severe enough to interfere with daily function and independence.

A diagnosis of dementia is made via a variety of tests to rule out other, treatable conditions and may include physical and neurological examinations as well as cognitive testing. Some dementias are incurable while the progression of other dementias may be slowed or reversed with treatment.

Dementia refers to a group of symptoms that indicate brain function has been damaged, usually by disease or injury. It is characterized by a decline in one or more areas of conscious mental activity—such as language, learning and memory—severe enough to interfere with daily function and independence. Symptoms may include:

Dementia affects an estimated 50 million people worldwide; this number is expected to grow as the population ages.

Many different diseases can cause dementia. Alzheimer's disease is the leading cause, accounting for up to one half to two-thirds of cases. The second most common cause is vascular dementia, also known as vascular cognitive impairment (VCI), which often occurs after a stroke when blood flow to certain areas of the brain is blocked. Mixed dementia, where a person has more than one type of dementia, is often found in older people. However, dementia is not a normal part of aging.

How is dementia diagnosed and evaluated?

Dementia diagnosis uses a variety of tests to rule out other, treatable conditions such as depression, vitamin B12 deficiency, hydrocephalus and hypothyroidism. Physical and neurological examinations and cognitive testing are usually part of the analysis.

Brain imaging is a useful complement to laboratory tests to rule out other treatable conditions such as brain tumor. Your doctor may order one of the following imaging tests:

MRI of the head uses a powerful magnetic field, radio frequency pulses and a computer to produce detailed pictures of the brain to detect brain abnormalities and diagnose conditions in the brain. Sometimes contrast material is injected into an arm vein to enhance the images. Head MRI may also reveal whether a stroke has recently occurred. See the Safety page for more information about MRI. In many cases the physicians may order a second MRI to assess changes that have occurred in the interval.

Brain functional magnetic resonance imaging (fMRI) uses MR imaging to measure blood flow and oxygen changes that take place in an active part of the brain. fMRI can be used to help assess how brain function has been impacted by stroke, trauma or degenerative disease such as Alzheimer's. However, its use as a diagnostic test is limited in dementia.

CT of the head combines special x-ray equipment with sophisticated computers to produce multiple images or pictures of the inside of the head. CT can detect atrophy related to dementia and provide detailed information on head injuries, stroke, and other brain diseases. Sometimes contrast material is injected into an arm vein to enhance the images. See the Safety page for more information about CT.

PET is a diagnostic examination that uses a small amount of radioactive material (called a radiotracer) to help diagnose and determine the severity of a variety of diseases. PET can be combined with CT or MRI to provide detail on both the function (from the PET scan) or anatomy (from the CT or MRI) of the brain. A special form of PET can help identify abnormal clusters of proteins associated with Alzheimer's disease.

Lumbar puncture, also known as a spinal tap, is a diagnostic test that uses a needle to remove a small amount of cerebrospinal fluid—the fluid that surrounds the brain and spinal cord. Research suggests that people with early-stage Alzheimer's disease may have abnormal protein clusters in their cerebrospinal fluid.

How is dementia treated?

While there is no cure for some dementias, the progression of some types of dementia can be slowed or even reversed with treatment. Options include: 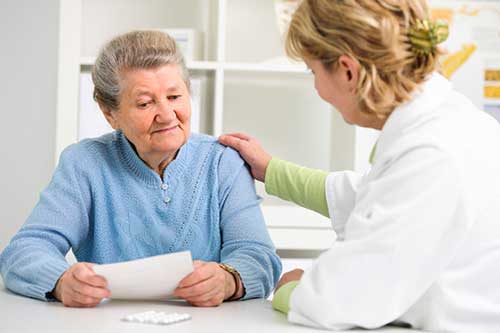